Breathlessness - also called Essoufflement - is a symptom of exhaustion that can occur especially during physically demanding dives with insufficiently tested equipment (especially regulators and cylinder valves). 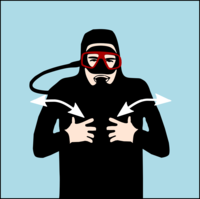 Breathlessness can be caused by various circumstances:

You fall into fast but shallow breathing. On one hand, this causes the respiratory muscles to tire and, on the other hand, carbon dioxide is insufficiently exhaled. Hence, the respiratory reflex is intensified and this leads into a vicious circle. As consequence not enough fresh air is inhaled leading to decreasing oxygen levels. Worst case scenario can be unconsciousness.

As a direct measure, you should concentrate on slow and deep breathing, reduce the diving depth and stop any activity until your breathing normalizes. It is imperative that you notify your diving partner with the illustrated underwater sign and, if necessary, keep hand contact with them. After the dive, you should have your regulator, cylinder valves and diving suit checked. 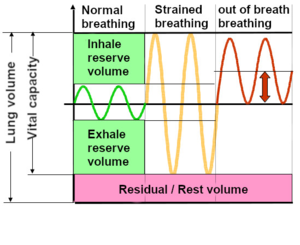 Use of the lung volumes during resting breathing, physical effort and breathlessness.

The most important immediate measure is to control breathing to normalize oxygen and carbon dioxide levels. Especially you should exhale multiple time extremely deep to decrease the CO2-level. Furthermore, concentrating on slow and deep breathing is the first step towards fighting panic. In addition, there should be contact with the diving buddy, slow down or if possible stop any activity until breathing normalizes and ascent slowely.

As the ambient pressure increases with increasing depth, the density of the breathing gas also increases. At greater depths, the laminar gas flow in the airways changes into a turbulent flow. The gas is literally tougher. This significantly increases breathing resistance and promotes breathlessness.