From Taucherpedia
(Redirected from Oxygen)
Jump to: navigation, search 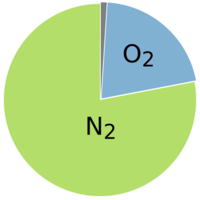 Air is a gas mixture that forms the earth's atmosphere and is composed mainly of nitrogen and oxygen. Other components are argon, carbon dioxide and some trace gases.

Normal atmospheric air consists of approximately 21% oxygen (O2) and 78% nitrogen (N2). The composition is largely constant even at great altitudes.

Oxygen (chemical symbol: O2) is essential for survival because it is needed to generate energy in the body's cells. Here oxygen is converted to carbon dioxide. The air you exhale therefore contains less oxygen and more carbon dioxide than the inhaled air.

Oxygen is an oxidizing gas. In connection with fuel and heat it can contribute to high flammability. Oxygen becomes intoxicating when breathed under to high partial pressure.

Nitrogen (chemical symbol: N2) is an inert gas that does not participate in human metabolism and is therefore not essential for survival. However, N2 saturates in the body. The saturation level depends on the ambient pressure. Therefore, it is most important that you stick to the plan you worked out with your dive table or what your dive computer is showing you regarding no-decompression limits or if necessary decompression times and depths.

Nitrogen has a narcotic effect at higher partial pressures and can cause a rapture of the depth.

Carbon dioxide (chemical symbol: CO2) is a waste product in the combustion of carbon-containing compounds. It also produced during the generation of energy in the body's cells and is released through the air we exhale. Und normal work load the partial pressure of CO2 in the exhaled air is 40 mbar. At sea level this corresponds to a CO2-content of 4%. Accordingly, the oxygen content of the exhaled air is only 17%.

Another very important concern are the rising levels of carbon dioxide in the atmosphere due to burning of fossil fuels and the consequences for the earth's climate.

Contrary to common knowledge, air is not weightless. One liter of dry air weights at normal conditions, i. e. at a pressure of 1 bar and a temperature of 0°C, about 1.3 g.

You can see this clearly when you compare the weight of a full and an empty diving cylinder: The difference can be between 1 kg and 3 kg. This must be taken into account when determining the amount of lead weights you need in order to be able to carry out a safety or deco stop even with an almost empty diving cylinder.

In addition to nitrogen and oxygen, air contains almost 1% of the noble gas argon (chemical symbol: Ar) and some other trace gases in very small quantities. Argon is often used to fill dry suits because of its lower thermal conductivity compared to air.

The noble gas helium (chemical symbol: He) is contained in slight traces in atmospheric air. In technical diving, it is used as an inert gas in trimix breathing gases.