The respiratory system is the entire organ system, which is responsible for breathing. It consists of the air passages, lungs and respiratory muscles.

The task of the respiratory system is to carry out a gas exchange between blood and air, enriching the blood with oxygen and releasing carbon dioxide. Effective gas exchange is achieved due to the extremely large surface area of the alveoli in relation to the volume of the lungs.

When diving, the lungs are not only used for breathing, they are also a gas-filled, variable-volume cavity that can be used for fine-tuning the buoyancy. 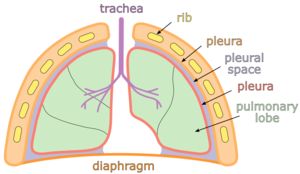 Anatomy of the human chest.

Air passes from the nasopharynx through the trachea into the bronchi, which branch out to the alveoli, in which the gas exchange with the blood takes place. An adult human has about 300 million alveoli with a diameter of about 0.2 mm, which are covered with a fine network of blood vessels. The resulting large surface area compared to the volume of the lungs is necessary to enable an effective gas exchange.

The lungs themselves are located in the chest and are protected by twelve pairs of ribs, the breastbone and the spine. It consists of two lungs with three lobes in the right lung and two lobes in the left lung. The two lungs are separated by the mediastinum.

The outside of the lungs and the inside of the chest are each covered with a skin – the pleura. Between this two skins there is a fluid-filled gap: the pleural space. This creates a flexible connection between the lungs and the chest. The lungs are limited to the abdominal cavity by a muscle - the diaphragm. The diaphragm and the rib muscles form the respiratory muscles that are responsible for breathing movements.

Usage of the lungs' volume during resting breathing and exertion.

When breathing, air is transported between the nasopharynx and the alveoli of the lungs where the gas exchange between air and blood takes place.

When inhaled, the chest and diaphragm expand through active muscle work. Since the lungs and pleura adhere to each other through the fluid in the pleural space, the lungs must follow this movement and a relative negative pressure is created. As a result, oxygen-rich air is flowing into the alveoli via the nose or mouth, the trachea and the bronchi. It is warmed, moistened and, as far as possible, freed of impurities that adhere to the walls lined with mucus and are conveyed back outwards by the cilia. If the breathing muscles relax, the elastic lung tissue contracts again and the air is passively expelled.

The gas exchange between air and blood takes place in the alveoli arranged in a grape shape: Oxygen, which is required for energy production in the body, is absorbed by the blood, and carbon dioxide, which is a waste product of cell respiration, is released into the air in the alveoli. The alveoli are enclosed by very thin membranes and surrounded by a dense network of the finest blood vessels. CO2-rich blood is transported via the pulmonary arteries and, after gas exchange, O2-rich blood is transported away via the pulmonary veins. Because of the thin membranes and finely branched blood vessels and alveoli, gas exchange takes only a fraction of a second.

The total gas volume of the lungs is around 6 liters, depending on training, body type and age. At rest, only about 0.5 liters of air are moved with one breath. The volume above and below is called the inhalation and exhalation reserve volume. Fully exhaled and then fully inhaled again (vital capacity) it is about 4.5 liters. The residual volume of about 1.5 liters is the volume of the trachea and bronchi that do not participate in the gas exchange.

Inhalation is controlled by the breathing stimulus triggered by the level of carbon dioxide in the blood. In the event of stress, breathing often shifts to the inhalation reserve volume, which means that carbon dioxide is insufficiently exhaled. This increases the breath stimulus and creates a vicious circle (see Essoufflement).

In general, breathing should be calm and uniform even when diving. Ideally, as on land, you should be in an exhaled state. This is usually difficult for inexperienced divers to implement. With increasing experience, however, this condition usually arises on its own.

You can find all informations in the article Pulmonary barotrauma.

Anatomy of the human chest.

The most important components of the human respiratory system are described below with regard to their structure and mode of operation.

The lung is divided into right and left lung, which are again divided into lung lobes. The right lung has three lobes, the left only two since the heart is in the left part of the chest.

The bronchi, alveoli and blood vessels of the lungs are embedded in each lung. The tissue from which the lungs are made is elastic. During inhalation it is actively expanded by the movements of the muscles, while it contracts by itself again when exhaling.

The lungs are covered on the outside with a skin, the so-called pleura. It forms the boundary to the pleural space.

The mediastinum is the area between the two lungs. The heart, the large blood vessels and both the trachea and esophagus are located in this area. 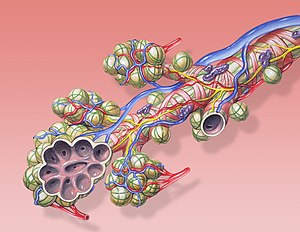 The bronchi connect directly to the trachea and distribute the air we breathe to both lungs. They continue to branch out inside the lungs. They end into the alveoli arranged in a grape like shape.

The alveoli are small vesicles in the lung tissue of about 0.2 mm in diameter at which the bronchi ends. They are covered by a fine network of blood vessels - the lung capillaries.

Since the walls of the alveoli are very thin, carbon dioxide is released from the blood into the breathing air while oxygen is taken up from the air. Therefore, the gas exchange only takes a fraction of a second.

An adult has about 300 million alveoli. This means that a very large surface area of around 100 m2 is available for gas exchange compared to the volume of the lungs.