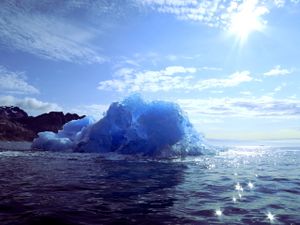 Water is the basis of life on earth and also the basis for diving itself.

Water covers almost 71% of the earth's surface. It forms the basis for all known life on planet earth. Even the human body consists of 50% to 75% of water.

In its pure form, water hardly ever occurs in nature, but always contains dissolved gases and salts. If the salt content is below 0.1%, this is called fresh water. Its density is almost exactly 1 kg per liter.

The salt water of the seas and oceans contains an average mass fraction of 3.5% of dissolved salts. Salt water therefore has a higher density than fresh water, which leads to a greater buoyancy and consequently to the fact that one has to carry more lead weights in the sea with the same equipment configuration to compensate.