From Taucherpedia
(Redirected from Buoyancy)
Jump to: navigation, search

Illustration of the Archimedes' principle.

Archimedes' principle describes the buoyancy that a body experiences when immersed into a liquid (more precisely into a fluid).

It explains the physical background behind buoyancy control in diving. 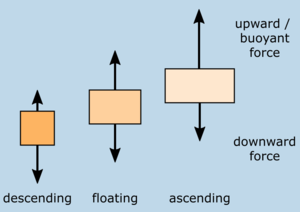 Buoyancy and forces in water acting on bodies with different volumes.

When an object is immersed into water, a downward force acts on it causing the the descend of the object. This force is simply its mass.

Additionally, an upward or so called buoyant force acts on the immersed object causing its ascend. Archimedes states that this force is equal to the mass of the water displaced by the object. Hence, the buoyant force is determined by the volume of the object (and the density of the water)

Depending on the proportion of these two forces, the object descends, ascends or floats:

Difference between fresh and salt water