Pressure is the key physical factor in diving. The basic understanding is essential, as the term pressure appears in all sub-areas of diving.

From a physical point of view, pressure is a force related to the area it is acting on. In diving, the pressure is measured in bar.

From a physical point of view, pressure is the amount of force applied at right angles to the surface of an object per unit area. The higher the force, the higher is also the pressure. On the surface, we are constantly exposed to the surrounding air at a pressure of 1 bar at sea level. This pressure is caused by the weight of the atmosphere. Since water is significantly denser and therefore heavier than air, the pressure we are exposed to in water increases drastically with depth.

While diving you do not need to worry about being crushed and being hurt by the pressure you are exposed to. You will only feel the pressure on your ears, which is why it is important to equalize frequently while descending. Since you are breathing compressed air and your lungs, therefore, equalizing automatically, one of the most important rules in diving is to never hold your breath.

In diving, pressure is usually measured in the unit bar. A pressure of 1 bar prevails at about sea level on the water surface. 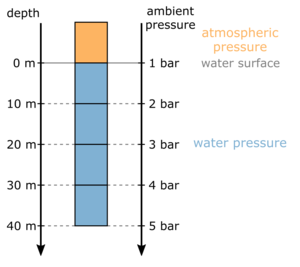 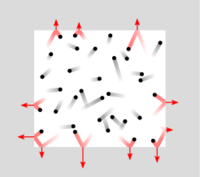 The pressure of a gas is caused by the smallest building block of the gas, it's molecules or atoms. These particles are permanently moving. Their speed is depending on the gas temperature and density. During these movements they collide with each other and the walls of its container, e. g. the cylinder.

You can imagine it as if you hold up a table top and your dive partner throws tennis balls against it. If he or she throws enough balls at the same time, you will find that you have to push yourself against the plate with strong force not to be pushed backwards. This force acting on the plate with a defined surface area is called pressure. The more balls hit the surface at the same time, the greater the force and the pressure. Exactly the same happens in your compressed air cylinder – but on a smaller scale: The particles are much smaller and exercise a very small force, but it holds a very high amount of gas molecules.

More particles in the same size container (volume) produce a higher pressure. So you can easily imagine what it means that your dive tank is holding compressed air with 200 bar pressure: The empty tank would have the same pressure as the surrounding area. Ambient pressure at sea level is 1 bar. A filled tank holds 200 times this pressure. This relationship is described by the Boyle-Mariotte law.

The pressure [math]p[/math] is generally considered as a force [math]F[/math] which acts on a defined surface with the area [math]A[/math].

The greater the force, the higher the pressure. If the same force spreads over a larger area, the pressure is correspondingly lower.

Just try to stand on your tow tips for a while. Your weight respectively the force is acting on a much smaller area as if you would standing as usually on your whole foot. Got the point?

Hydrostatic pressure is the pressure that is exerted by a fluid, i. e. a fluid or a gas, at equilibrium at a given point within the fluid, due to the force of gravity. Hydrostatic pressure increases in proportion to depth measured from the surface because of the increasing weight of fluid exerting downward force from above. The force [math]F[/math] is determined by the objects mass [math]m[/math] and its acceleration due to gravity [math]g[/math]. 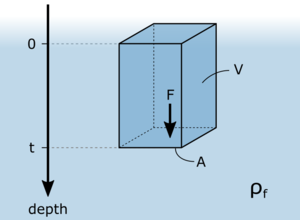 Force [math]F[/math] acting on the ground of a column of fluid with height [math]t[/math] due to the hydrostatic pressure.

The volume of the fluid column is [math]A \cdot t[/math]:

The hydrostatic pressure is dependent of the density of the fluid [math]\rho_{\text{f}}[/math] and the depth [math]t[/math].

To calculate the hydrostatic pressure of water, e. g. the water pressure in dependency of the depth, we assume the gravitational acceleration [math]g[/math] to 9.81 m/s2 and set the density [math]\rho_{\text{f}}[/math] to 1 kg/dm3 for fresh water. Then the water pressure [math]p[/math] in depth [math]t[/math] is:

In order to determine the pressure relevant for the decompression calculation, we need the ambient pressure acting on our body. That means we have to add to the water pressure the atmospheric pressure from the surface.

The air in the earth's atmosphere also generates a hydrostatic pressure as gas, which, like the water pressure, depends on the height of the air layer above. This again depends on the altitude we are in. However, since air is compressible and its density therefore depends on both pressure and temperature, the calculation is much more complex than with water pressure.