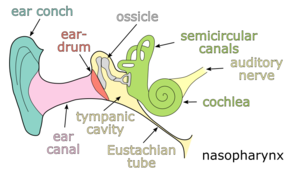 Structure of the human ear.

The human ear is responsible for hearing and holding the balance. It is divided into three areas outer ear, middle ear and inner ear.

The outer ear consist of the ear conch and the ear canal. It traps sound waves in the air or in the water and channels them down in the ear canal (auditory canal) to the eardrum (tympanic membrane) of the middle ear. The eardrum forms an airtight barrier between outer ear and middle ear. Sound waves vibrate the eardrum, which is attached to three ossicles-bones that conduct and magnify the vibration. The ossicles use mechanical advantage to amplify the vibration as they pass to the cochlea in the inner ear.

The cochlea is an organ partly filled with liquid called perilymph. The ossicles attach to the oval window of the cochlea, which flexes in and out in response to ossicle vibration. As the oval window flexes, it pushes against the perilymph, causing pressure waves to oscillate through the cochlea. The pressure waves stimulate auditory nerve endings in the cochlea, turning pressure waves into nerve impulses the brain understands. Also located in the inner ear are the vestibular canals (vestibular endorgans) which control balance and the sense of orientation.

Especially during the descending and landing phase of an aircraft, the ambient pressure rises, which you notice as pressure on the ears. With the help of this connection, you can get relief in the ears by swallowing or yawning. When diving you have the same experience: If you dive, you feel a pressure on the ears. To avoid injury you have to equalize the pressure between the outer and the middle ear.

In the ear canal is continuously earwax produced, which has a protective and cleaning function. The earwax is transported to the outside through the fine hairs together with all the dirt that has penetrated into the ear canal. In no case should you try to remove the earwax from the ear canal with cotton swabs or other instruments. First, it will destroy the cleansing and protective effect, secondly, you can very easy push the earwax into a plug and block the ear canal, and third, you risk injury to the very sensitive eardrum. Earwax, which is already in the area of the outer ear, can be easily removed during daily hygiene without tools.

If you were diving in saltwater, it is recommended that, when showering, let fresh water drip into your ears for a while to dissolve and remove dried salt crystals. These salt crystals can cause itching and discomfort which you should never try to relieve by scratching or pressing. The sharp-edged crystals cause also small cuts in the ear canal in the pathogens easily penetrate and can cause inflammation.

All information on injuries to the ear due to excessive pressure differences between the middle and outer ear can be found in the article barotrauma.