Inert gas saturation is the accumulation of a gas that does not participate in metabolic processes in the body tissues. The most relevant inert gas for diving is nitrogen. Therefore we speak also about nitrogen saturation.

Saturation and desaturation of nitrogen in the body during a dive.

Gases can dissolve in liquids – like sugar or salt. The concentration of the gas in the liquid in the saturation state is directly related to the pressure the gas is exposed to (see Henry's law). Although nitrogen does not participate in the metabolic processes in the body – i. e. it is a so-called inert gas –, but it is present in all body tissues in a dissolved form. On the surface one is in the saturation state with reference to the body temperature and the air pressure.

With rising ambient pressure during descent the amount of breathing gas in the lungs rises respectively and so the amount of nitrogen. The nitrogen is transported via the blood into all body tissues and gets more and more saturated there. The amount of dissolved nitrogen depends on several factors:

In normal recreational diving, most tissues are partially saturated. However, tissue with high circulation or the blood itself can also be completely saturated.

When ascending, the nitrogen which is dissolved in the body must be transported back to the lungs by the blood and released by exhalation. The pressure reduction must be so slow that nitrogen bubbles cannot form. Check the difference in opening a sparkling water bottle at once and another one very slowly. If bubbles form in our body while ascending to fast, it is called a decompression sickness. 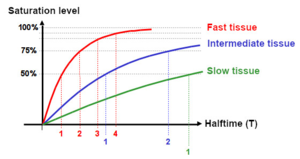 During descent, the partial pressure of nitrogen in the breathing air increases due to the increasing ambient pressure. The body takes on more nitrogen through the lungs which is dissolved in the blood and transported into the body tissues.

The desaturation on ascent and after the dive follows the same laws: at the beginning it is very fast and becomes slower by time. Here one assumes, analogously to the saturation, that the tissue is completely desaturated after 6 T.

The human body consists of different types of tissues with different properties, especially in terms of saturation behavior. For the decompression calculation, the body is divided into 6 to 16 tissue groups (so-called compartments) with different tissue half-value times. These depend on blood circulation in the tissue and nitrogen storage capacity.

The tissue groups are subdivided into slow, medium and fast tissues. Fat, for example, can store five times more nitrogen than muscle tissue, but has a relatively high tissue half-life time due to the lower blood flow and is therefore one of the slow tissues.

Tissues in which the blood flow rate may change during exercise or under the influence of temperature, such as muscles or skin, will change their tissue half-value time and, as a result, saturate faster.