Before diving, neither medication nor intoxicants or stimulants should be used. 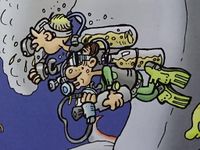 The fun within a group while diving may be intensified by alcohol, but if used before the dive it has dangerous effects. In addition to the expansion of the skin vessels and the resulting increased heat loss also the respiratory center is energized. More critical are the psychological effects: euphoria, lack of self-criticism, slowing of reactions. Because of the increased blood flow, the possibility of getting nitrogen narcosis, as well as the risk of a decompression accident is higher. Since alcohol in the body degrades only slowly, residual alcohol from the evening before is still dangerous.

When it comes to medicines: Anything in the instruction leaflet that indicates a restriction on road traffic is also dangerous for diving. It is good practice to contact your physician especially if you are on long term medication. Some medicines change their effect under pressure. Let your doctor know that you are diving to discuss with you what is possible and what not to do.

In addition to the influence of nicotine, smoking causes damage to the respiratory tract and lungs through the inhalation of numerous substances such as dust and tar. The transportability of cilia, which normally carry these foreign bodies back, is hindered. There is an increased formation of mucus and an increase in breathing resistance.

The quick cigarette before the dive also cancels out compressor manufacturers' efforts for clean breathing air. In controlled emergency ascends conducted by the Navy in a dive tower were 73% of all occurred accidents smokers. In addition, increased slime formation can lead to problems with equalization.